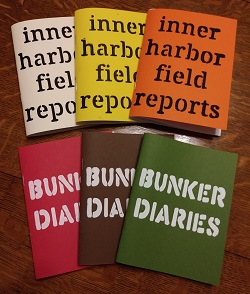 Bunker Diaries: a brief fictional journal of an unnamed instructor toiling in a bunker somewhere. Originally serialized online in Fall 2012.

'Sean takes a behaviorist's perspective of locals, tourists, and birds.

The peoplewatching and birdwatching happen side-by-side and the migration patterns of both are noted.

Perfect for anyone who loves birds and hates people (but is fascinated by them).'

Read about my previous zines: Thoughtworm and Hatred of Writing.